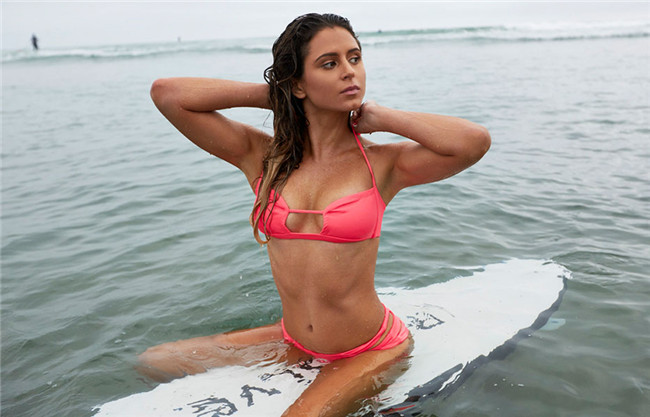 12 of the Most Stunning Female Athletes in the World

Athletes Here is the list of the 12 hottest/sexiest female athletes in the world right now.  The selection criteria were that the athletes should be active in the game and second, they should be HOT! 1. Maria Sharapova Maria Sharapova is a Russian player who is currently ranked No. 8 in the world by the...
READ MORE
SHARE
Facebook
F
Twitter
T
Google
G
COMMENTS

Here is the list of the 12 hottest/sexiest female athletes in the world right now.

The selection criteria were that the athletes should be active in the game and second, they should be HOT!

Maria Sharapova is a Russian player who is currently ranked No. 8 in the world by the Women’s Tennis Association (WTA).

Sharapova has won 29 WTA singles titles, including four Grand Slam singles titles. She was World No. 1 in singles on five separate occasions, for a total of 21 weeks.

The Russian is famous all over the world and is actively involved in a number of brand endorsement deals, and even has her own line of candy called ‘Sugarpova’.

Anastasia Ashley is a professional surfer. She has been surfing since the age of seven.

Ashley has won various awards in her career like the Association of Professional Surfer’s Triple Crown Rookie of the Year, the National Scholastic Surfing Association’s women’s championship and the Pro Surf Tour of America’s women’s tour championship.

Skylar Diggins is a 25 year old professional WNBA player for the Tulsa Shock. The 5’9 South Bend native made it to the pro’s after a successful career at Notre Dame.

Still, the basketball beauty continues to make headlines for both her looks and her skills on the court, winning the WNBA ESPY Award.

Diggins has also made it on TV in the series ‘Wild ‘n Out’ as a Team Captain. When she’s not dealing with basketball she is campaigning to stop childhood obesity. Diggins is also a model represented by Roc Nation and she has credits with Sports Illustrated and Vogue on her resume.

At age 22, she was the youngest player on the national team at the 2011 FIFA Women’s World Cup.In 2012, Morgan was named US Soccer Female Athlete of the Year and FIFA World Player of the Year.

Hilary Knight is a professional hockey player, Olympic Silver Medalist for the USA, MVP of the Canadian Women’s Professional hockey league, four-time World Champion and three-time All American in the sport of women’s hockey…and she looks good doing it!

Lindsey Caroline Vonn is an American ski racer. She has won four overall World Cup championships, with three consecutive titles in 2008, 2009, and 2010. Vonn won the gold medal in downhill at the 2010 Winter Olympics, the first ever in the event for an American woman.

With her Olympic gold and bronze medals, two World Championship gold medals in 2009 (plus three silver medals in 2007 / 2011), and four overall World Cup titles, Vonn has become the most successful American skier in history.

Allison Stokke is one of the most famous collegiate pole vaulters in the history of the sport. She has been pretty athletic since her youth and she even qualified for the 2005 World Youth Championship.

Danica Sue Patrick is an American auto racing driver and model. She is the most successful woman in the history of American open-wheel racing.

Her win in the 2008 Indy Japan 300 is the only women’s victory in an IndyCar Series race. She competed in the series from 2005 to 2011.In 2012, Patrick competed in the NASCAR Nationwide Series, and in 2013 she became the first female NASCAR driver to win a NASCAR Sprint Cup Series pole.

She was named the Rookie of the Year for both the 2005 Indianapolis 500 and the 2005 IndyCar Series seasons. She holds the IRL record for most consecutive races running at the finish.

She was part of the Dutch squad that became World Champions at the 2006 Women’s Hockey World Cup. Hoog has played 127 matches for the national team in which she has scored 32 goals.

Ana Ivanovic is a Serbian tennis player who was ranked No. 1 in the world in 2008. Currently ranked No. 12, Ivanovic has won 13 WTA Tour singles titles.

Jessica Ennis is a British track athlete who won the gold medal in the heptathlon in the 2012 Olympics. If having ripped abs were an Olympic event she probably would have won a medal for that as well.

Paige is a pro golfer who is know for her Instagram account as much as her golf game. She has recently taken a break from her instagram to focus on golf, we hope she returns soon. She is our number one and a great reason to start watching golf!

What?! Models Carry Other Models in 69 Position During A Fashion Show