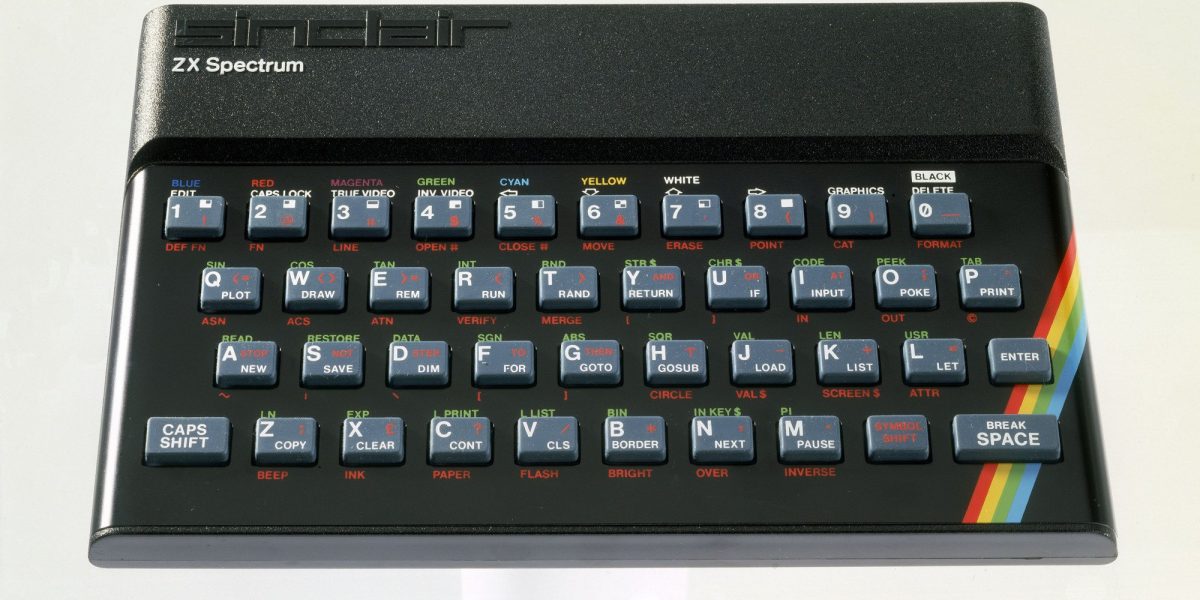 ZX Spectrum Some events that you think have occurred recently, in fact, are up to now for years, or even dozens of years. For many readers, Geektimes ZX Spectrum appeared like a few years ago, but this is not entirely true – today this computer has turned 35 years old. It was for some people...
READ MORE
SHARE
Facebook
F
Twitter
T
Google
G
COMMENTS 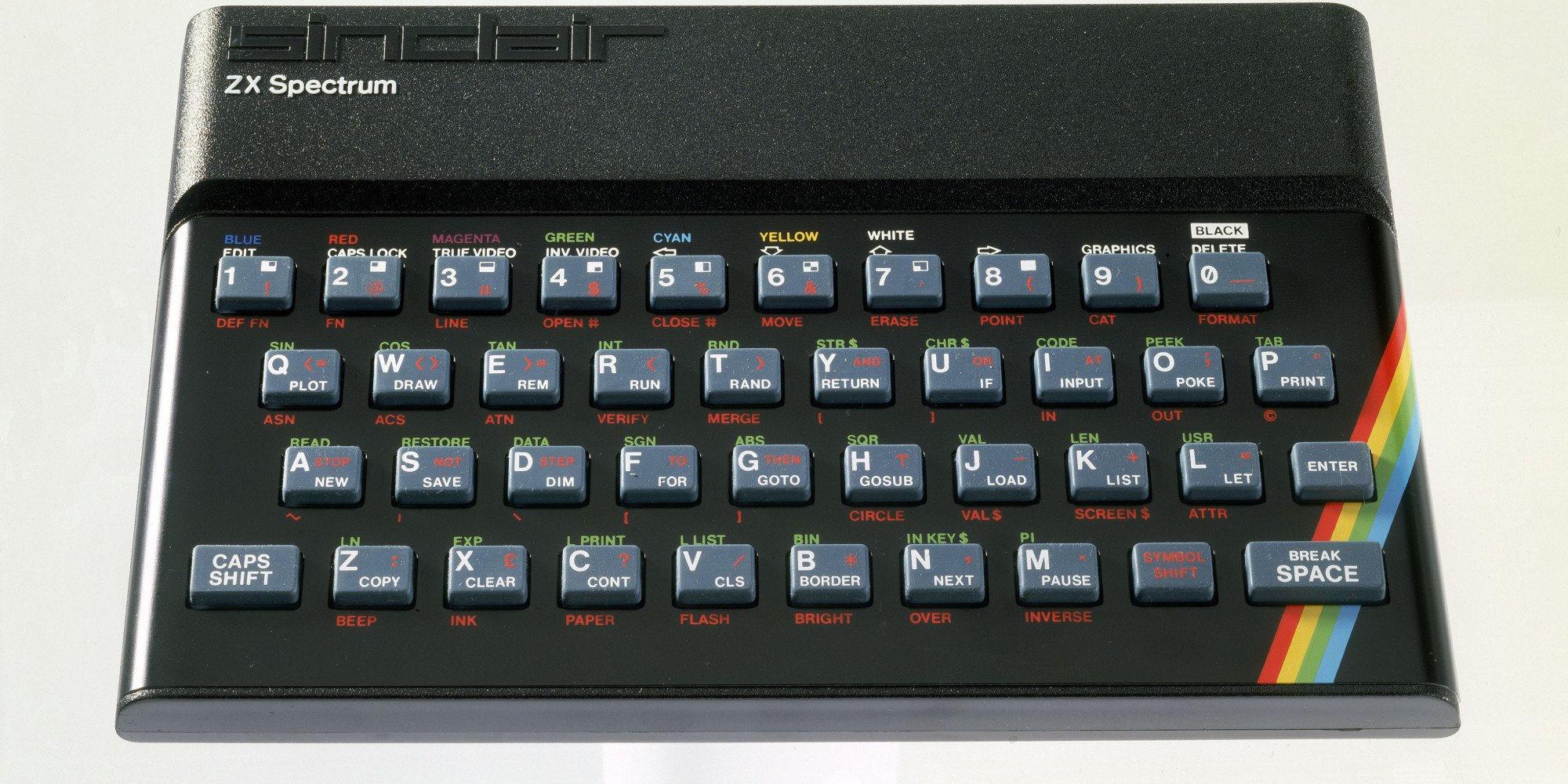 Some events that you think have occurred recently, in fact, are up to now for years, or even dozens of years. For many readers, Geektimes ZX Spectrum appeared like a few years ago, but this is not entirely true – today this computer has turned 35 years old. It was for some people the first computer that helped define the future profession – programming, game development, or something related to IT.

It appeared just in time to become popular. The fact is that in the 70s of the last century computer equipment was available, mainly to scientists, financiers and representatives of other spheres. Computers used only for work and nothing else. But by the end of the 1970s, another version of the operation of electronic systems appeared – entertainment, in particular, games.

Some manufacturers, realizing that there is a demand for such computers, have started the development of specialized systems that make it possible to use the possibilities of computer technology at home. True, their cost was very high, several thousand, and even tens of thousands of US dollars, so that they were available only to very well-secured buyers.

Among entrepreneurs and manufacturers of computer technology, adherents of the idea appeared, according to which computers for “going to the masses” should radically fall in price. In addition, a number of representatives of the IT sector believed that computers for home use should be much less dimensional and simpler than those that were available at that time. 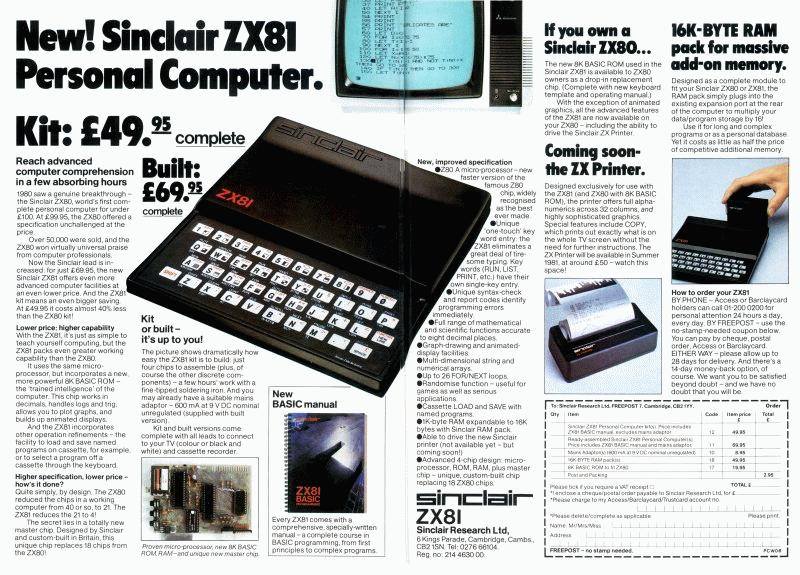 This idea was first realized by the company Sinclair Research, led by Clive Sinclair (Clive Sinclair). Her staff created a relatively simple device, which was not worth much, but it allowed them to start learning the basics of programming. So the programs could be written on their own, and not wait for them to appear on sale. Of course, you could develop not only the usual software, but also games.

The computer in Sinclair Research was not created immediately, its development team began in the mid-70’s. The project was delayed for several years, but in 1980 all the works were finished, and the computer appeared on the market ZX80, the cost of which was only about 80 pounds sterling. It was the world’s first PC with a price of up to 100 pounds. 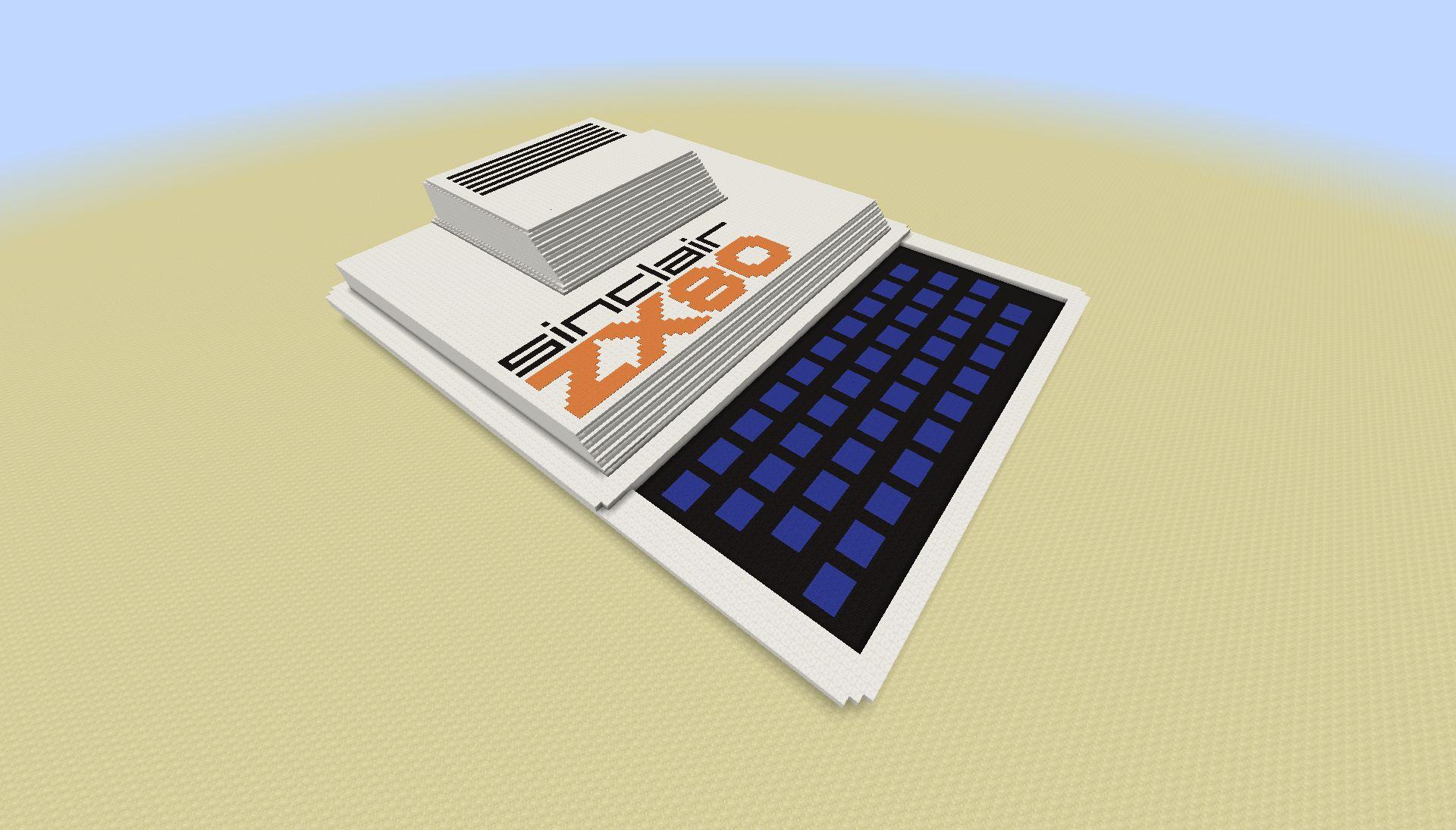 ZX 80, recreated in the environment of Minecraft

The developers managed to reduce the cost of computers due to the use of not the most expensive parts and simplifying the scheme of the PC itself. As a processor, developers used an inexpensive chip Zilog Z80, whose core frequency was only 3.25 MHz. The amount of RAM is only 1 KB. If you want, you could install another 16 KB, for which the expansion modules were delivered to the market, which, however, cost almost as much as the computer itself. The volume of the ROM is 4 kilobytes. And in the memory of the device was already Sinclair BASIC.

Among its other advantages – low cost and a relatively small number of logical chips. Plus, in this computer there was a very small amount of moving parts. Initially, this was done for reasons of economy, but then a small number of such elements became the standard. I recall that now we are talking about the computer ZX80.

Buyers quickly appreciated this miniature (for that time) computer. He also knew how to show graphics, but only when the system was not busy with the calculations. There was no video controller here, the graphics were mainly formed due to the software part. In order to see the image, you had to connect the computer to the TV. In the 80’s they were already at many, so the user saved money, buying only the main part of the computer without a monitor. Almost immediately after its launch on the market, the first model became very popular. There was a significant excess of demand over supply.

In 1981 there was a new model, which was named ZX81. It was supplied in the form of a “designer”, from which it was possible to assemble a computer, and a ready-made system. The cost of the first option was 49.95 pounds sterling, the second – 69.99. It was slowly started selling not only by mail, but also in retail chains. As for the processor, it used the same Z80 with a core clock speed of 3.25 MHz. The RAM was the same as the previous model – 1 KB, which was not liked by many. But the ROM volume has already grown up to 8 kilobytes. In this model, the video controller also did not exist. Sales of new items exceeded sales volumes of ZX80 several times. 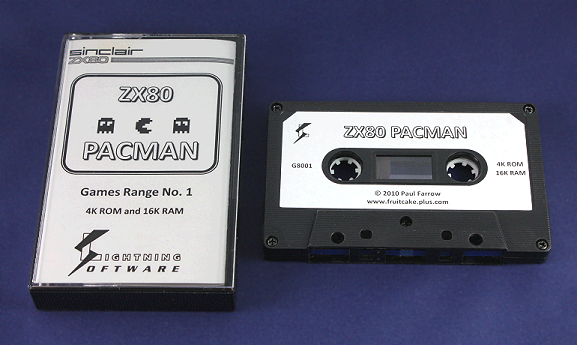 Finally, the favorite of the public ZX Spectrum. The computer was sold on April 23, 1982. Buyers could order this device by mail, it fell into the hands of retailers. In ZX Spectrum, there were several new features at once. For example, this computer was adapted to work with color TVs. Actually, that’s why it’s called Spectrum, and on its case there is an iridescent strip.

A graphic controller was added to form graphics. The amount of RAM was already 16 KB, and the volume of ROM increased to the same level. The maximum amount of RAM, supported by ZX Spectrum, was 48 KB. In order to store the written programs, it was suggested to use audio cassettes and a tape recorder. Keys, by the way, the engineers created from rubber, they replaced the membrane keyboard of the previous two models.

The most interesting thing is that the computer was originally developed for schools and offices. And his gamers appreciated it. All because it was inexpensive, and the created game could be loaded into memory from the audio cassette. Plus the price was low compared to other devices. Cassettes began to exchange, the computer appeared fans, began to be formed fan clubs. Some cassettes with software and games began to protect against rewriting. When buying a user gave a special code that allows you to run on the computer the contents of the cassette. The cost of the new model was 125 pounds sterling for the model with 16 KB of memory and 175 for the PC with 48 KB of RAM. After a while, prices were reduced to 99.95 and 129.95 pounds.

Two years later the company released an updated model ZX Spectrum + with 48 KB of RAM by default. There was also a new, more convenient keyboard. 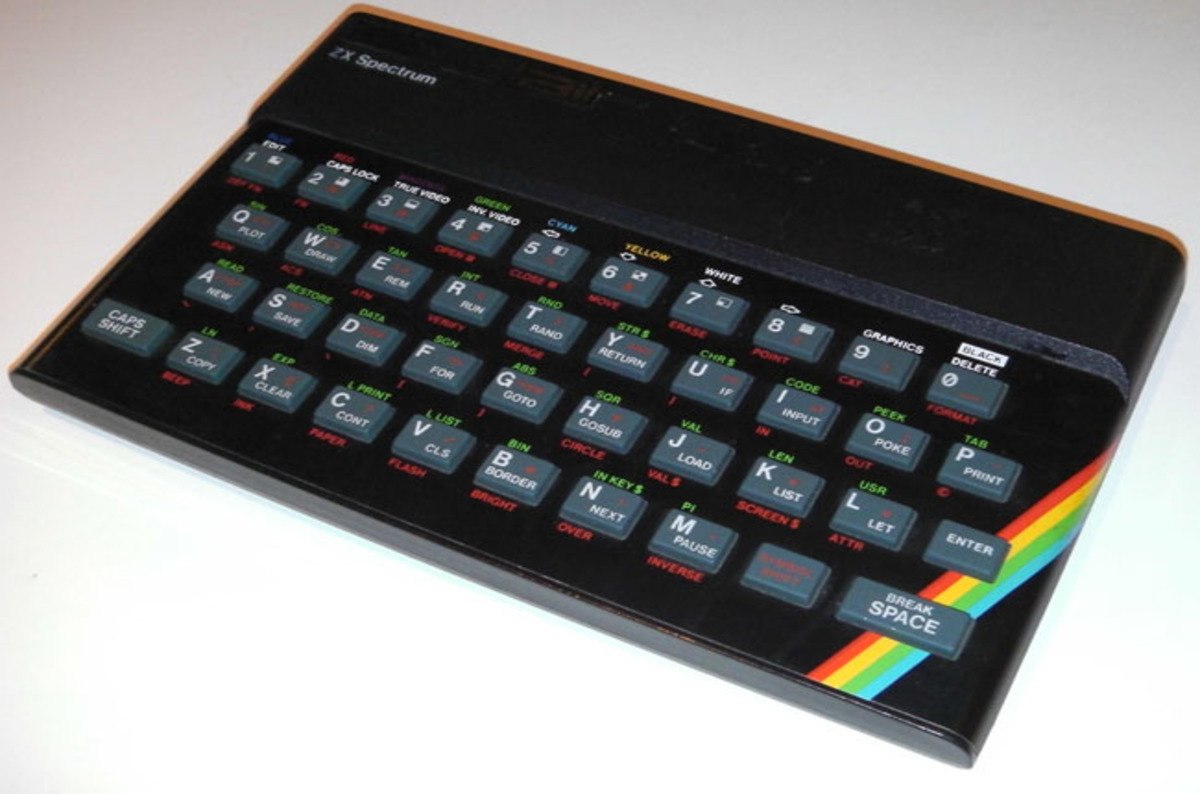 Two years later the computer ZX Spectrum 128 appeared, which was developed jointly with Spanish engineers. Here added RAM up to 128 KB, doubled the amount of ROM (up to 32 KB). Also worth noting is the appearance of three-channel audio with the standard AY-3-8910, RGB-output to the monitor and compatibility with MIDI.

In 1986, the creator of this computer, Clive Sinclair, sold the brand to Amstrad. She continued to produce Spectrum until 1992.

As for the ZX Spectrum, it became extremely popular in the USSR and other countries. Because of the Cold War, many parts of the device were banned in the Soviet Union, and Spectrum itself was banned from importation. But the Soviet engineers quickly enough could develop a domestic clone of this computer, using only the details available in the USSR. These clones were made both at various enterprises and by private individuals – craftsmen who learned how to assemble the machine with their own hands. And the cost of them was considerable for a Soviet man – about 100 rubles, but this did not prevent the device from gaining popularity.

Already in the 90’s for Spectrum and its copies began to clone games, hits that at that time gaining popularity . At that time, game developers could still work in a single person, combining the features of a musician, graphic designer and, in fact, a developer.

In addition to the USSR, Spectrum has become popular in other countries, including South America. 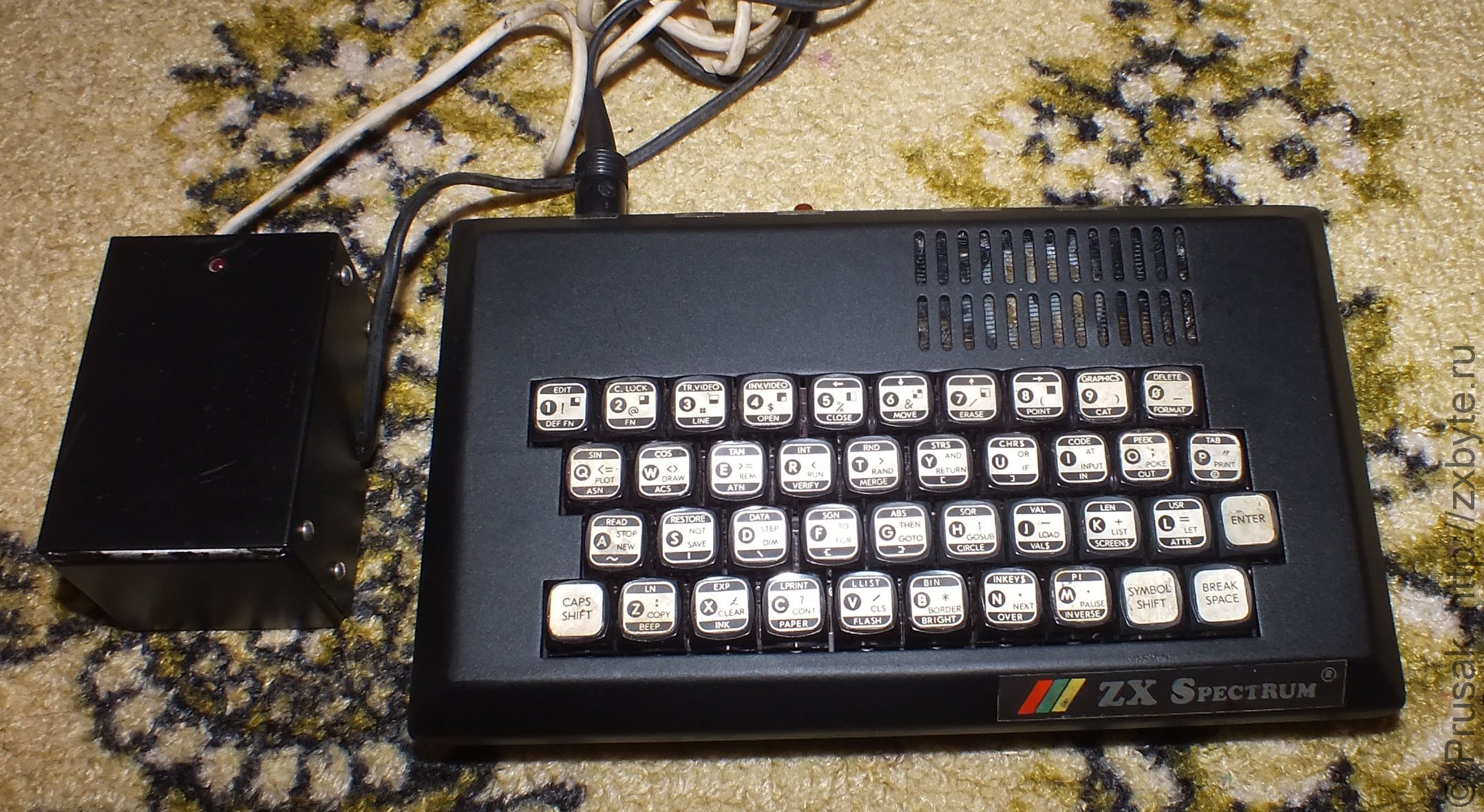 Various accessories were released for the ZX Spectrum and compatible models. There were many of them. For example, Spectrum created a special printer. True, he printed it with a spark method, so the paper needed special, with aluminum spraying. For printing, two needles were used, tension was created between them, a spark ran and a symbol was burned on paper. There were 32 symbols in the line.

A separate ROM module based on magnetic tape was also released. It was faster and more productive than a conventional audiocassette, but it did not get distribution, because the tapes were less expensive and much more affordable. 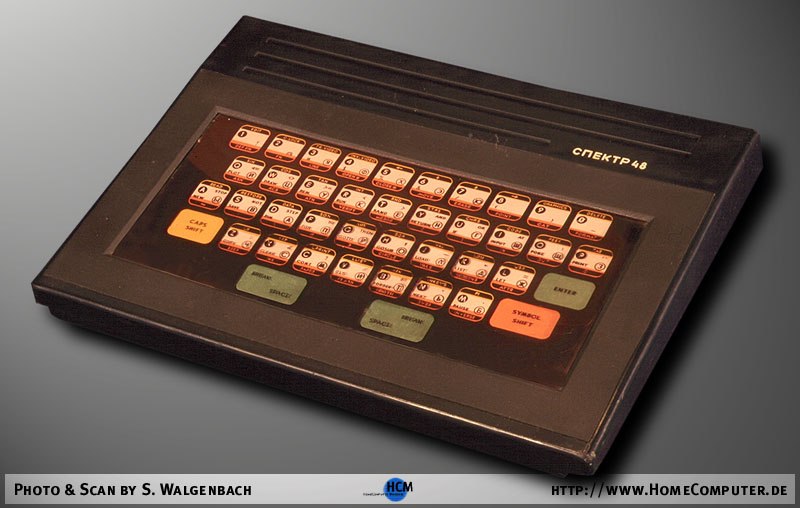 Still there were modules that added a network interface and a module to the computer’s functionality, allowing to connect the joystick. Yes, not one, but two at once, so that the owner of the device and his friend could learn the wisdom of gaming together. It was all a bit expensive, so the modules were not very popular either. 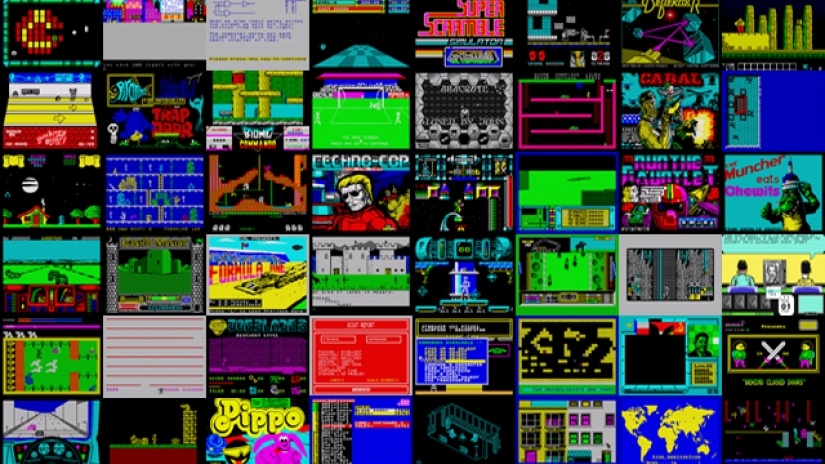 As for the software, then, as already mentioned above, programs for the ZX Spectrum were written by both companies and independent programmers. The number of second was much higher than the first at the very beginning, when Sinclair Research company just brought its computer to the market. As the popularity of this system grew, companies began to show interest in writing a PC for it. Programmers gathered in groups and formed all the new enterprises that supplied software and games to the market.

In the second half of the 80’s the number of software for the Spectrum platform began to grow exponentially. The number of games has grown, the stories and soundtracks have begun to develop with graphics. Interestingly, at about the same time, the system of protection of programs against illegal copying began to appear actively. Well, in the late 80’s – early 90’s the platform began to lose popularity, accordingly, under the ZX Spectrum, there were not so many programs released as before. On the other hand, at this time there were many excellent games and application software, which has been continued in our time.

Reincarnation of vinyl: reflections on the paradoxical trend

Bayans of great ancestors or engineering problems of the module "Science" 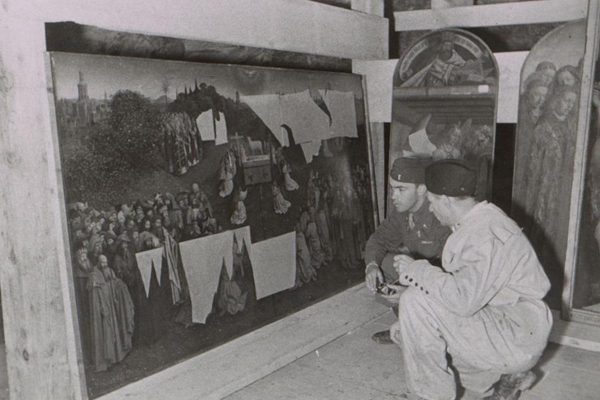 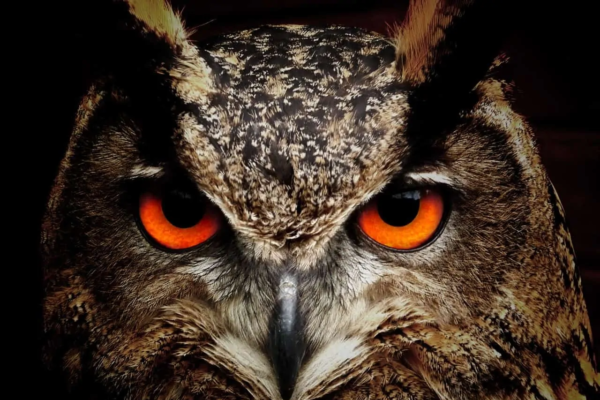